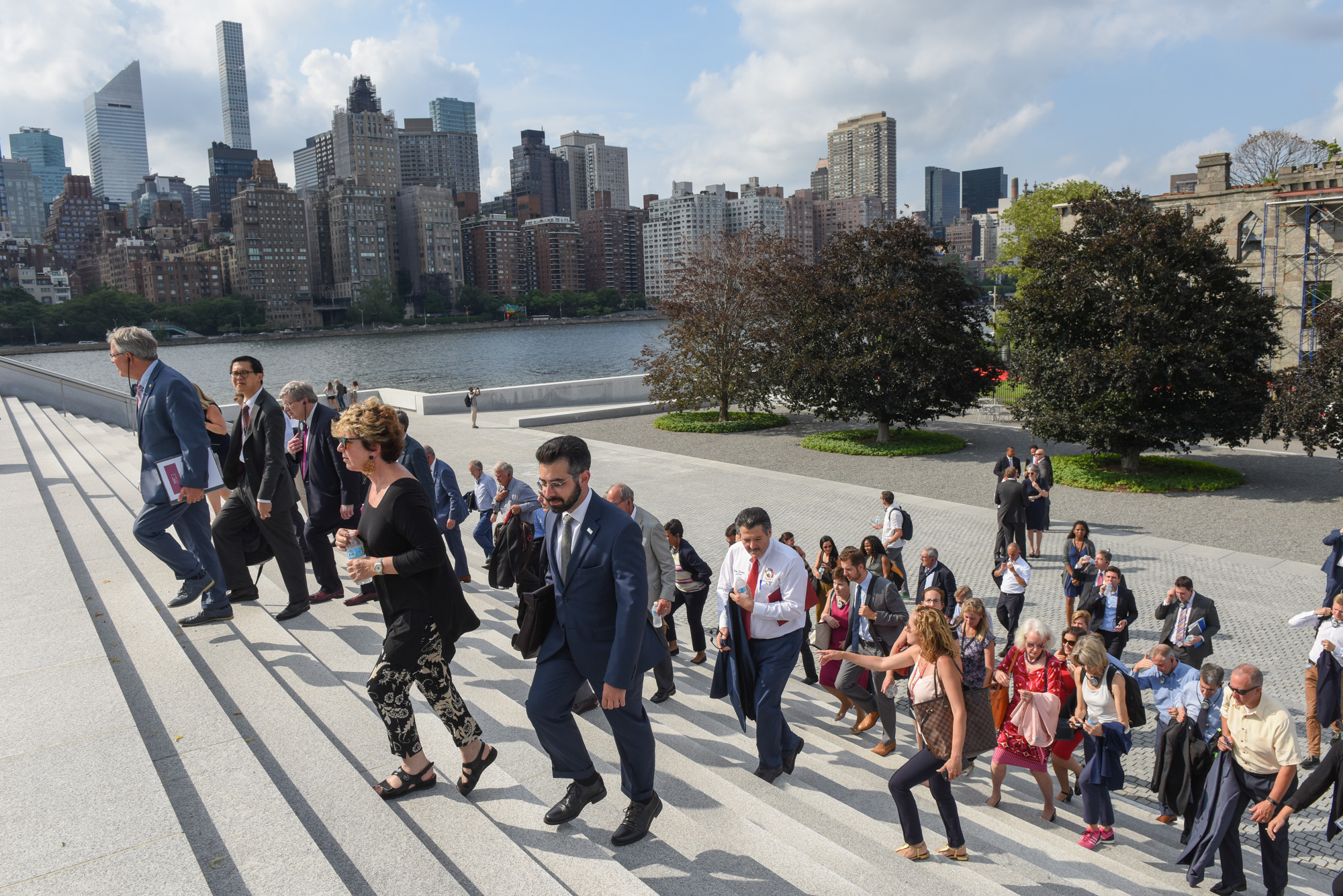 July 19, 2018 - Next week, 40 mayors from cities across the US and around the world will start a yearlong professional-development program tailored to the challenges of governing a city. They’re the second group of mayors to get this executive training, aimed at sharpening their leadership skills.

They’ll get the sort of experience that most corporate CEOs take for granted, but remains rare in the public sector. Starting with a three-day program in New York, and continuing through a year of virtual classroom sessions and coaching, the new class will analyze cases of public-sector success and failure, explore smart ways to take risks, improve how they use data to solve problems and innovate, and motivate others to engage in collective action. The program brings together the expertise of Harvard Kennedy School, Harvard Business School, and Bloomberg Philanthropies to support these mayors and their leadership teams.

But as the previous class of mayors in the Bloomberg Harvard City Leadership Initiative has found, most of the learning takes place outside the classroom. As the first group of 40 spent the last year applying new ideas and implementing new practices at home, they shared the results with their classmates. The job of mayor is demanding and there is typically little opportunity to prepare for it, nor time to reflect on it while doing it. As Mayor Karen Freeman-Wilson of Gary, Indiana, put it: “There is great benefit to hearing other people’s ideas, and talking it through outside of your own team.”

As we continue to learn with and from the mayors, several insights emerged from the program’s first class:

City leadership comes from both the head and the heart.

Leveraging limited resources to make significant impact is a key challenge for all mayors. This requires strategic thinking and analysis of what the problem is, which responses work, and which do not. Mayors increasingly see the value of using data and evidence to make decisions.

In Laredo, Texas, for example, Mayor Pete Saenz is using data to target resources to pursue reductions in poverty. “We were throwing money at things where we assumed it was needed,” Saenz said. “Now, we’re able to ask questions that help us strategically apply resources to the source of the problem. That’s efficiency and good government. We’ll be able to save our taxpayers money.”

Meanwhile, in Grand Rapids, Michigan, Mayor Rosalynn Bliss is using data to create racial equity in the provision of services. “Philosophically, I’ve been data-driven, but it’s overwhelming with multiple databases that don’t talk to each other,” she said. “It’s been helpful to have concrete examples from other cities on how they’ve done it. We can look at demographic and geographic data, and build in the equity aspect from the beginning.”

However, numbers without a compelling narrative are just numbers. Mayors also need to forge connections with constituents that speak to the heart and build a common sense of purpose. Bliss is building this capability in her city as well. “We’ve had a significant uptick in lead poisoning affecting kids, especially in our poorest neighborhoods, with over 600 kids testing positive,” she said. “Combining the data and the stories of the families I’ve met, with the call to action for community members to get involved, has helped mobilize the whole community to combat this problem.”

Solving problems requires leading both inside and outside of city hall.

As public-sector leaders, mayors must wear two hats. In the office, they have to engage their staff in driving the performance of the government. At the same time, as the public face of the city, they engage the broader community and mobilize the whole city to address important issues.

A number of mayors in the program said they’ve reworked their approach to managing, to establish a more inclusive culture, effectively delegate, and encourage collaboration across departments. It helped that each mayor was able to send two high-level officials to Bloomberg Harvard programming for senior city hall leaders throughout the year.

“We don’t have senior leadership meetings in the same way anymore,” said Providence, Rhode Island, Mayor Jorge Elorza. “We’ve identified core priorities: economic opportunity and workforce, long-term budgeting, education and learning, operational efficiency, capital improvements, and vacant and abandoned homes. We meet every month in cross-team meetings, and everyone who needs to be in the room for those conversations comes. We focus on the priorities and making sure everyone is contributing.”

But city hall can’t do it all. Solving tough problems often requires combining resources and expertise from multiple sectors: the business community, nonprofits, universities, philanthropy, and others. Mayors are looking to hone their cross-sector collaboration skills. Ten cities took a deep dive at this and sent cross-sector teams of eight people each to New York for specialized training on the art of forging effective partnerships across multiple sectors and organizations.

In the U.K., Greater Manchester’s Andy Burnham has set an ambitious agenda to ensure all children have the basic language and social skills to start learning when they enter school. Greater Manchester is now collaborating with educators, the nonprofit sector, the BBC, and The Behavioural Insights Team. “What I heard in so many different ways was that you can only really achieve your goals if you unlock the contribution of both the community and organization,” Burnham said. “You need the citizens and private sector and all parts of society pulling together for the same goal. Just doing it through public policy or some sort of edict won’t get you results.”

Taking risks in the public sector can be tough. Media and critics are quick to pounce when a mayor’s idea isn’t working out as planned. Of course, nobody likes the notion of “gambling” with taxpayer’s money. And yet, sometimes the biggest risk is doing nothing at all. The old aphorism that insanity is “trying the same thing while expecting different outcomes” certainly holds true for government.

Mayors realize this and are eager to innovate while minimizing the risk of failure. A number of mayors have taken the opportunity to create space for small experiments that can lead to big changes. These mayors are learning to break the habit of rolling out big programs and policies and then hoping for the best. Instead, they’re trying out more iterative approaches, where they test out an idea, learn what does and doesn’t work, and then adapt it. This process of prototyping solutions actually reduces risk, saves taxpayer money, and gets the public engaged early.

That’s what Chattanooga, Tennessee, Mayor Andy Berke has found. “Instead of trying to figure out how much time and effort to invest in a new product before releasing it to the public, now we try to release a product first, get feedback, and then plan to make adjustments from there,” Berke said. As an example, he cited a community calendar the city was preparing to publish. “We were discussing all the things we could add to it. And my comment was, ‘Why don’t we put it out there to a small group and let them use it, learn, and then let’s keep working on it and making it better.’ This approach has been a new motif for the city.”

Mayors are uniquely positioned to advance the sort of dialogue that can set a long-term vision for what a city wants to become. Mayor Greg Fischer of Louisville, Kentucky, talks of building a "compassionate city" that takes care of all citizens. Philadelphia’s Jim Kenney reclaimed local control of the city’s school system from the state, assuming accountability for better outcomes for Philly’s kids. And Dan Horrigan of Akron, Ohio, has set the mantra "Why not Akron?” to argue that the Rust Belt city should thrive rather than merely survive as he pursues new economic development partnerships and builds a new community college.

While vision and courageous leadership are crucial, citizens expect potholes to be filled, trash to be picked up, and snow to be plowed on time. As Mike Bloomberg likes to say, a mayor’s job is ultimately to make sure that all the basic services are well-delivered. The credibility of a vision for the future for a city depends on a mayor’s ability to deliver results in the short term first. While mayors do not typically have the time or expertise to get into the weeds of their operations, they are ultimately responsible for the performance of their organization. Consistently, the mayors in our program have asked: What questions should I ask my staff and my stakeholders to learn what I need to know and to motivate them to do what they need to do?

Performance leadership is not just a matter of holding staff accountable. It is equally important to create an environment where those with the greatest insight are encouraged to speak up and contribute — and where the organization as a whole, from frontline to top management, learns. The mayor’s job, then, is to create conditions for collaborative learning, ask the right questions, demand and interrogate the data, and bring teams together across silos.

Mayor Roberto Cláudio applied these insights to mobilize expertise in order to reduce medical supply shortages in Fortaleza, Brazil. “Previously, I was the one in control,” said Cláudio. “Now, I share the major purpose and goals and the team sets up the specifics. Now, people from different areas integrate their work. They talk much more than me and I give them much more responsibility and control. There is a feeling of being part of the team.”

“The learning,” said Mayor Don Iveson of Edmonton, Canada, “is that the greater good is served, and better results achieved, from working to delegate more and working to empower more.”