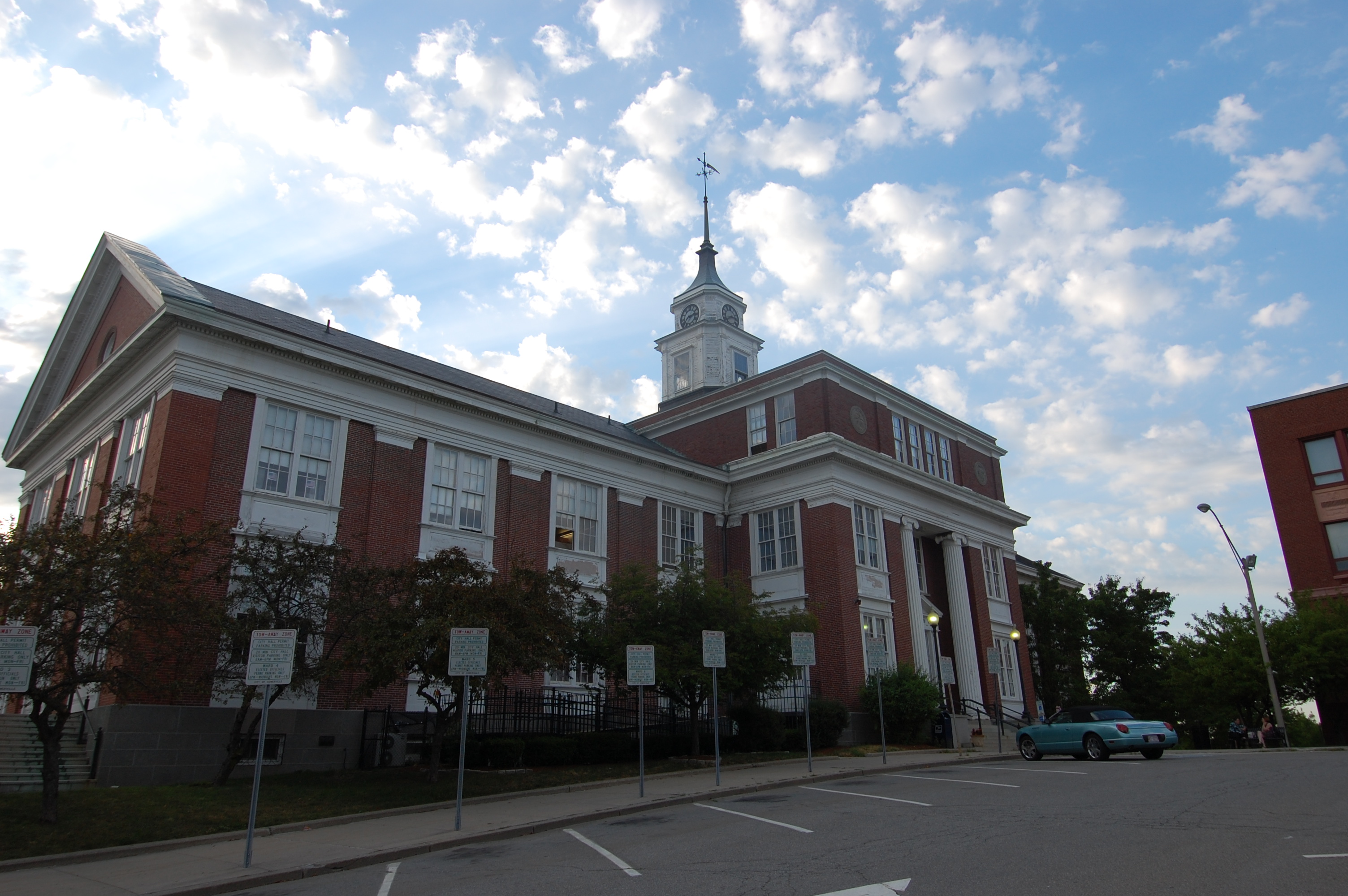 For sixteen years, longer than any mayor in the city’s history, Mayor Joseph Curtatone has led his hometown of Somerville, Massachusetts. The case begins in January 2020, with the mayor looking ahead to his recently-won, two-year term—and to the city’s future without him at the helm. Although he would never feel his work was done, he wondered whether it was time to pass the baton, and if not now, when?

Curtatone, with his intense curiosity for how things work and how they can be improved, brought data and evidence-based decision making to Somerville—a city with a checkered past of corruption and controversy—when he was inaugurated in 2004. He and his team quickly stood up a performance-management system called SomerStat—a constituent services 311 call line under the tagline “one call to city hall”; revamped the city’s budget to be more transparent and tied to strategic goals; and championed an evidence-based, systems-thinking approach to reducing obesity among the city’s schoolchildren and other residents. By 2006, Somerville was hailed a “Model City” by the Boston Globe.

The case details how Mayor Curtatone’s culture of curiosity permeated city hall and led to numerous positive outcomes and innovations. One former chief of staff said that the city “runs on Joe Power,” but Curtatone felt that he empowered others to own their ideas. “I’ve tried to...ensure that the change is not going to be driven by me. I’ll be out front. I’ll take the hits, I’ll fight for it, so I hope, at least, people feel, ‘The mayor—he’s got our back.”

Still, Curtatone knew that “bad leadership can bring down any organization in a city real fast. And it takes years to recover.” He wondered when the right time would be to go and what would remain of the data-informed, decision-making capabilities that he had helped build. What could he do to ensure that even after he was out of office, his nearly two-decade investment would continue to pay dividends to the people of Somerville?‍

This case study is part of a portfolio of cases that are designed to help city leaders build data-analytic capabilities in city government. The overarching learning objectives of the portfolio are to help participants explore and understand 1) why to use data; 2) how to use data; and 3) what to do to become—and remain—a more informed city hall.

This case explores each of the learning objectives in more detail:

How data can make a city better:

How to use data as a leader:

What to do to become or remain a city hall that uses data: 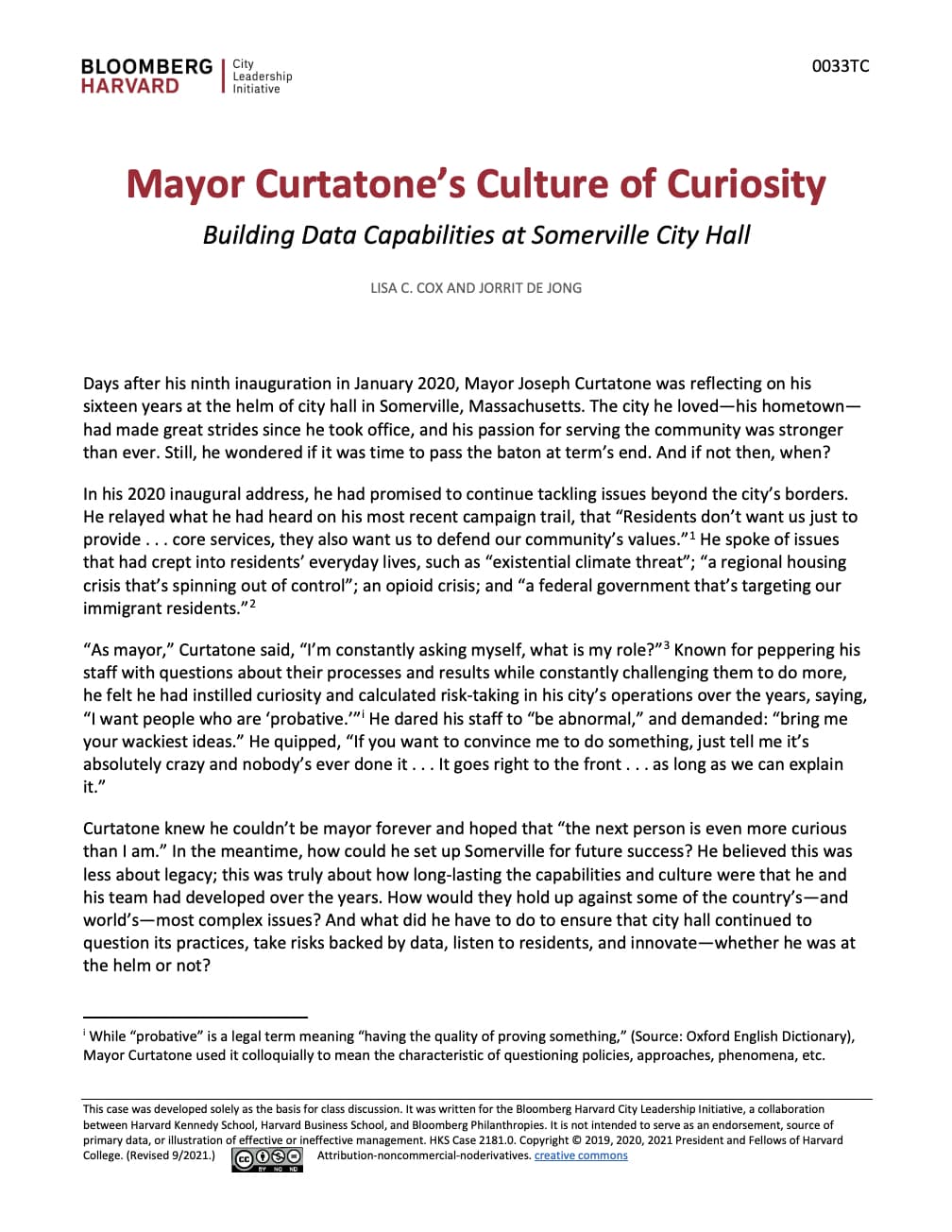 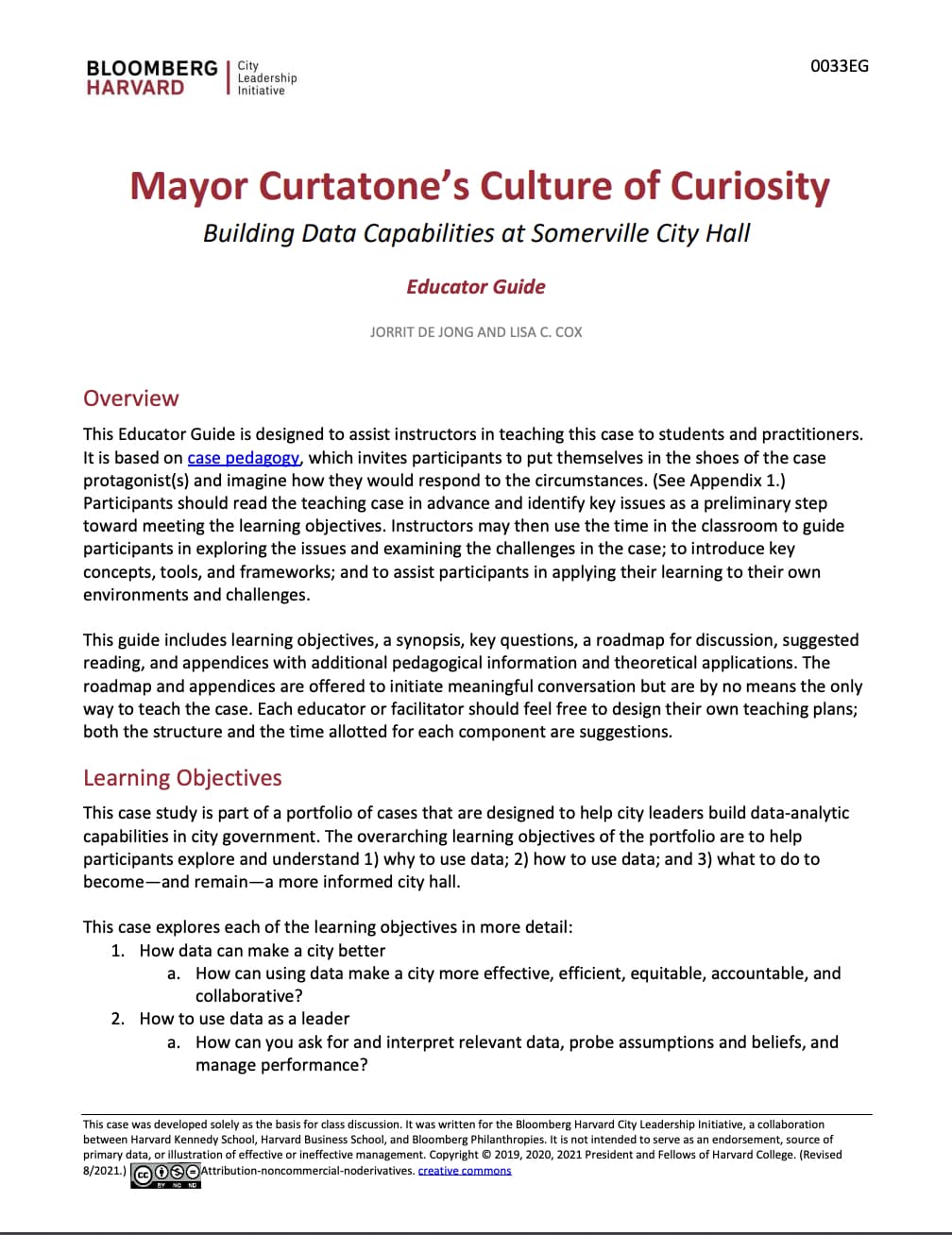 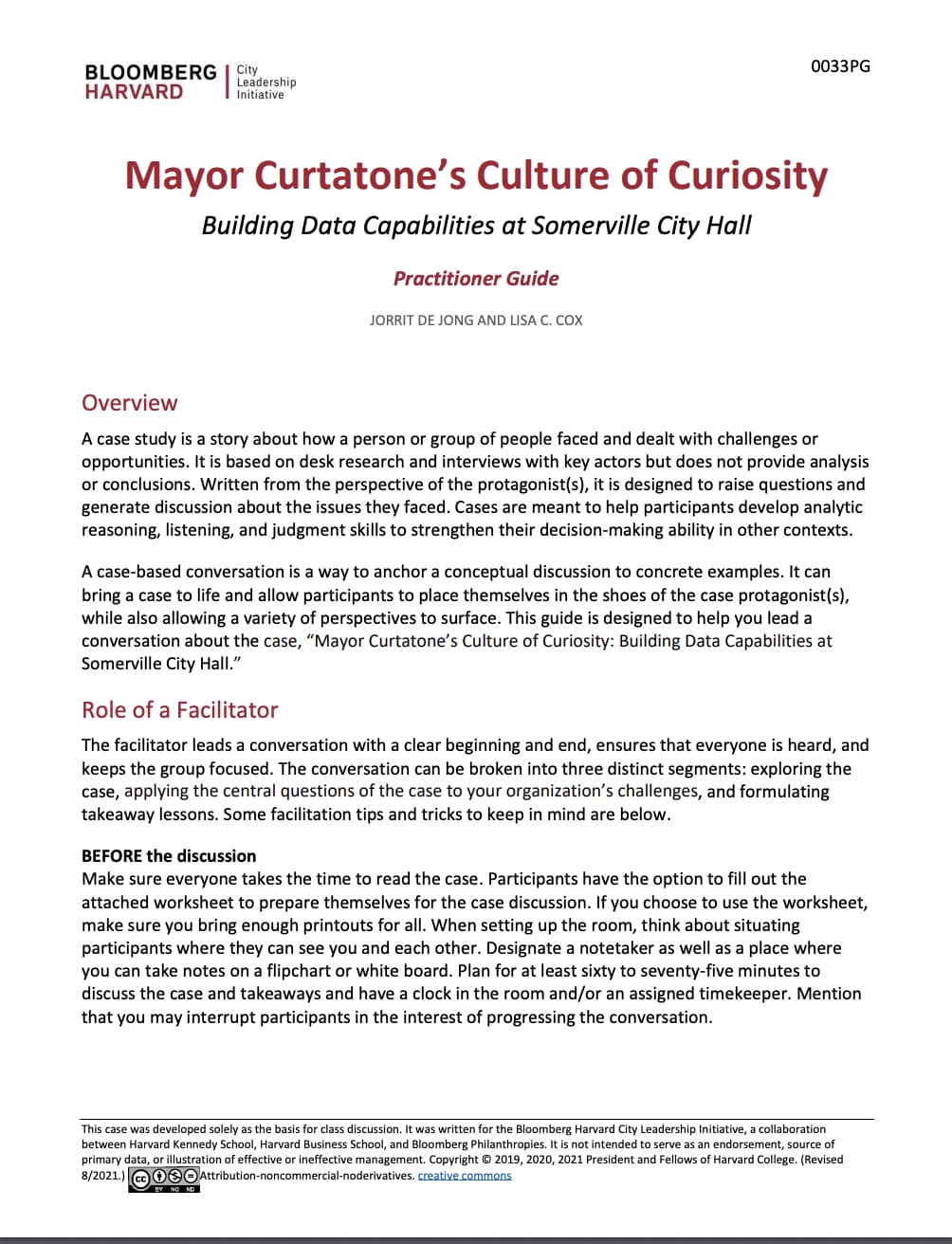 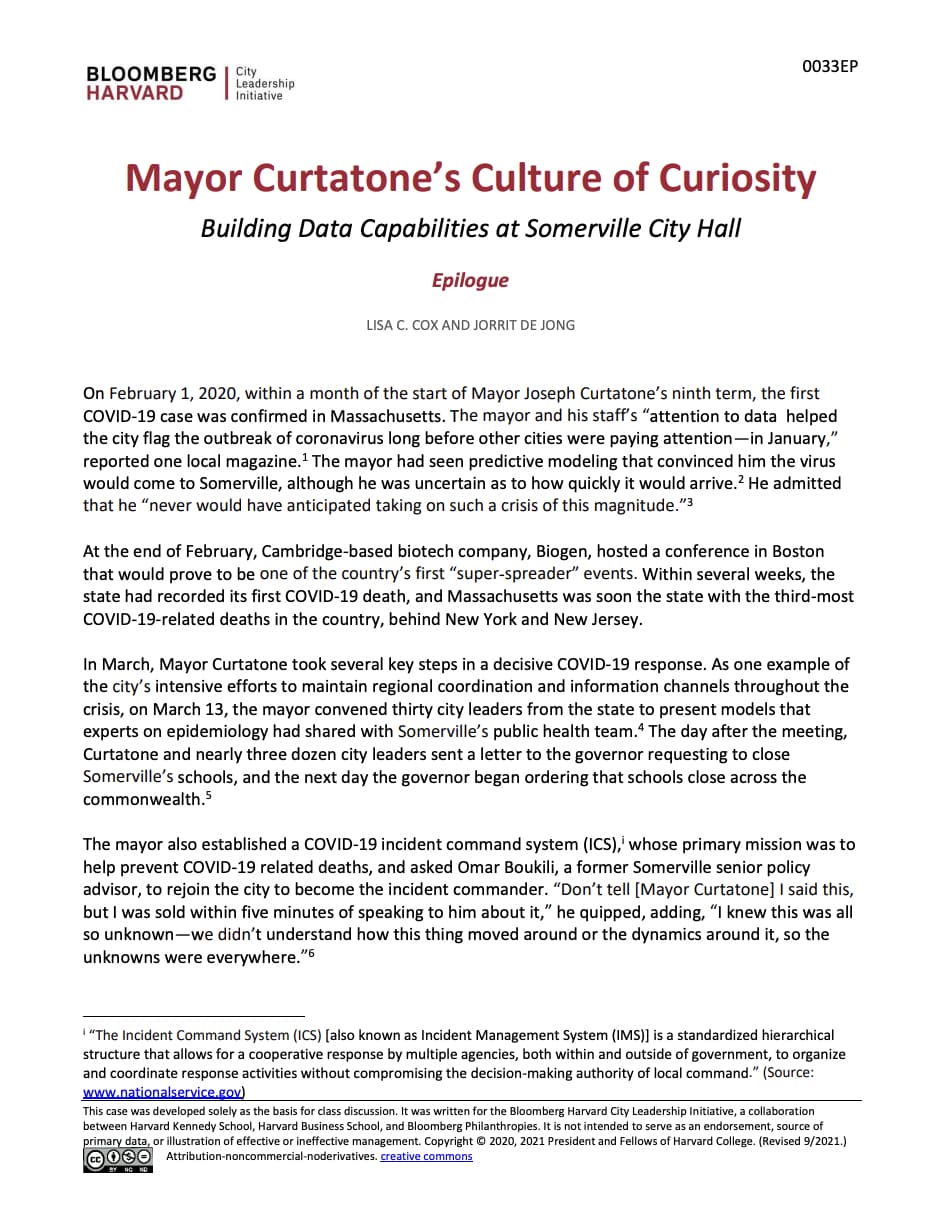 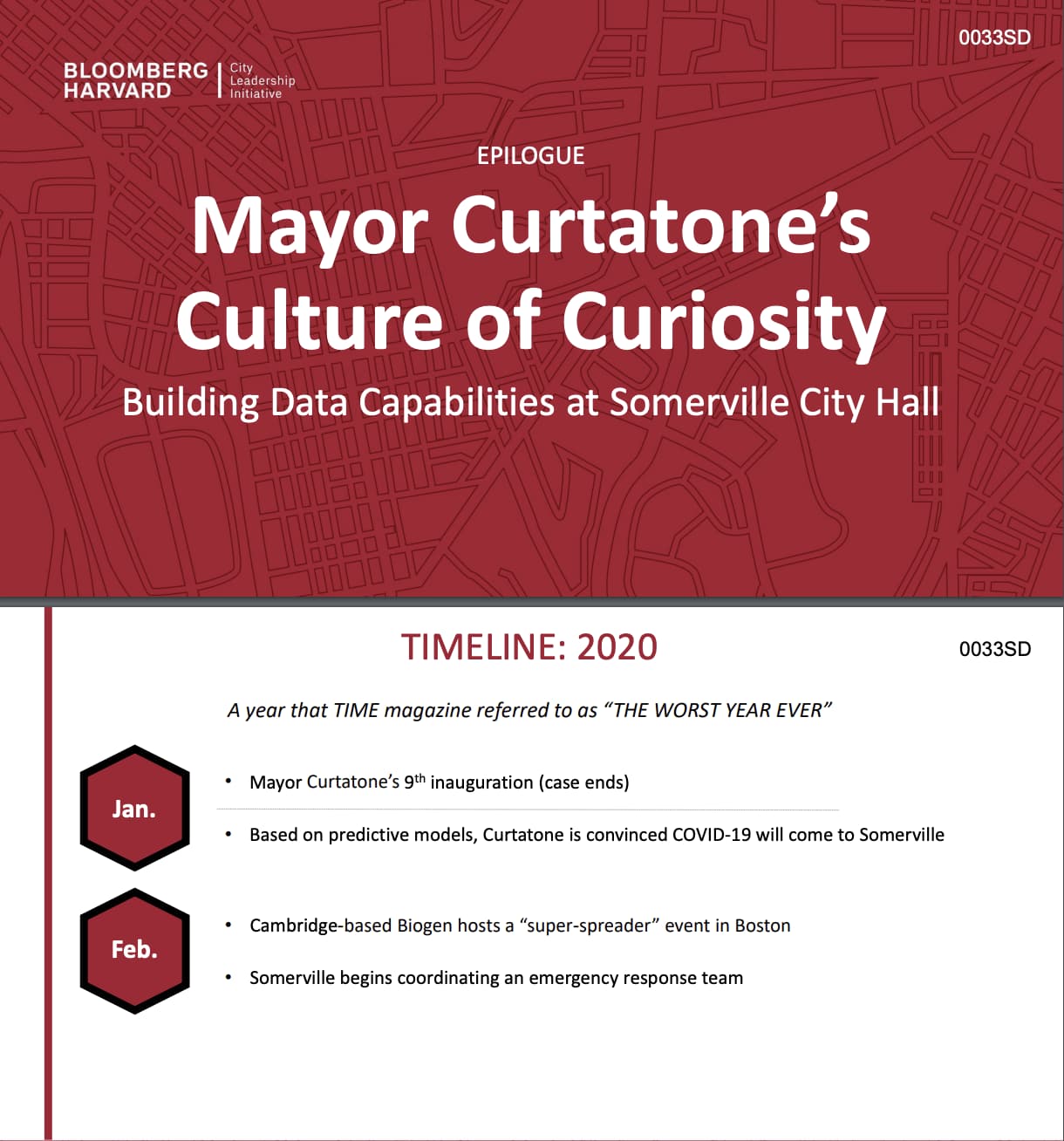