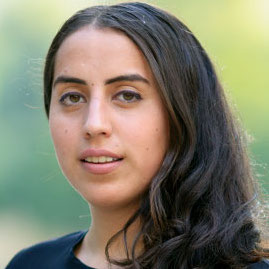 Isabel recruits participants for the annual flagship cohort of mayors and cities, as well as for the program for new mayors. In addition, Isabel provides support on user research, program design, and analysis for programming and support offerings for mayors, senior city officials, and city staff. Previously, Isabel worked for the Abdul Latif Jameel Poverty Action Lab (J-PAL) on program design and evaluation, leading the scaling of evidence-based interventions, and building relationships between governments, researchers, and donors in Latin America.

Isabel is passionate about working with governments to support the adaptation, implementation, and rigorous evaluation of innovative policies. As a student at Harvard Kennedy School, Isabel held a Bloomberg Harvard Summer Fellowship with the City of San Juan, Puerto Rico and helped the city develop a user-informed strategy to improve bulky waste collection.

Isabel has a Bachelor of Arts in Political Science from the Instituto Tecnológico Autónomo de México and a Master’s in Public Policy from the Harvard Kennedy School where she was also President of the Harvard University Mexican Association of Students.