Eight Types of Power City Leaders Can Use When Negotiating 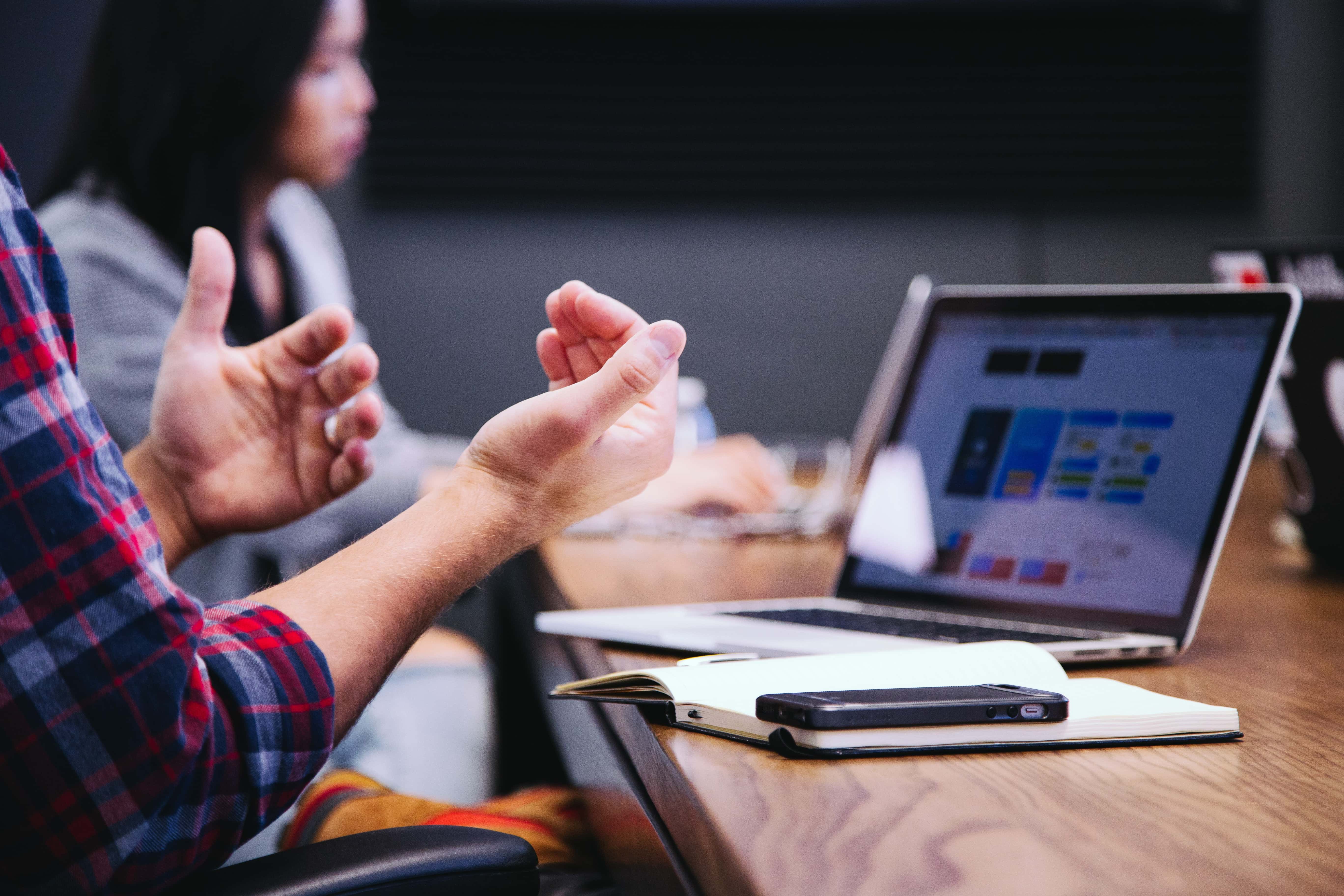 City leaders often feel their hands are tied in multiparty negotiations, but new research offers a framework for analyzing power in public negotiations that can help mayors and their staff develop a strong negotiation strategy.

Do you know your full arsenal of power moves when you’re getting to the negotiating table? Are you leaving value on the table for your city when bargaining with private sector parties, non-profits, or other government entities? As we argue in a recent academic article, negotiations in the public sphere demand a specific lens on how power is distributed and how it can be garnered, especially to support a mayor’s policy agenda and make a difference in constituents’ lives.

Every day, cities and their leaders are at the center of negotiations large and small, from simple procurement contracts for grass mowing to large-scale public-private partnerships for building a subway line. And while some citizens might think that mayors wield untold formal power, many times it’s the informal power, or a mixture of the two, that ultimately gets a negotiation to the finish line with constituents’ interests served.

Formal power might be what first comes to mind when one thinks of the influence of the mayor’s office. We differentiate broad formal power into four subtypes: institutional power, convening power, veto power, and shift power. Institutional power might include a mayor’s ability to focus on certain problems and influence the public agenda or to broadcast (or limit) certain messages, such as what’s included (or not included) in a mayor’s first 100 days plan. A mayor might leverage convening power by bringing together stakeholders and controlling the meeting agenda, e.g., leaving off or adding in certain discussion topics. Meanwhile, veto power might be brandished as a threat to change the negotiating field or leveraged to prevent an unacceptable deal. Mayors generally have low shift power, since they can’t be seen “flip-flopping” or treating different parties unequally.

Informal power, though less straightforward and more nuanced than formal power, is just as important, and it includes moral suasion power and nuisance power. Moral suasion power is especially relevant in the public realm, as it tends to deal with more controversial topics that may turn on moral or ethical arguments. Moral suasion is also available to weaker parties, and if expertly wielded, can, for example, secure a “seat at the table” for someone who was not party to a negotiation at the start. Nuisance power allows a group with no formal role in a negotiation to potentially change the narrative. For example, individuals without formal authority, such as grassroots activists, can call attention to a specific issue through protests, the media, or other negative publicity. Even using nuisance power as a threat can be a potent tool in negotiations.

Mixed power includes momentum power and coalitional power. Momentum power may take the form of earmarking funds for a project to send the message that the project is happening, a perception that could assist in rallying support. Coalitional power is a blend of formal authority and personal relationships. For example, a well-connected mayor can call on a diverse group of allies and other stakeholders to direct their resources to a larger cause. Coalitional power paired with nuisance power can create a formidable agent for change.

Given the growing expectation for city leaders to navigate and negotiate complex, multiparty issues and the increasing role of public-private partnerships at the municipal level, reflecting on different types of power in public negotiations could prove beneficial to city leaders. Below, we outline several suggestions:

Ultimately, no matter how simple or complex a city leader’s negotiation is, having a sense of where different types of power lie can be beneficial to driving a political agenda and achieving the best outcome for a city leader’s constituents.

“Sources of Power in Public Negotiations: A Framework Applied to Public-Public and Public-Private Negotiations”
Negotiation Journal 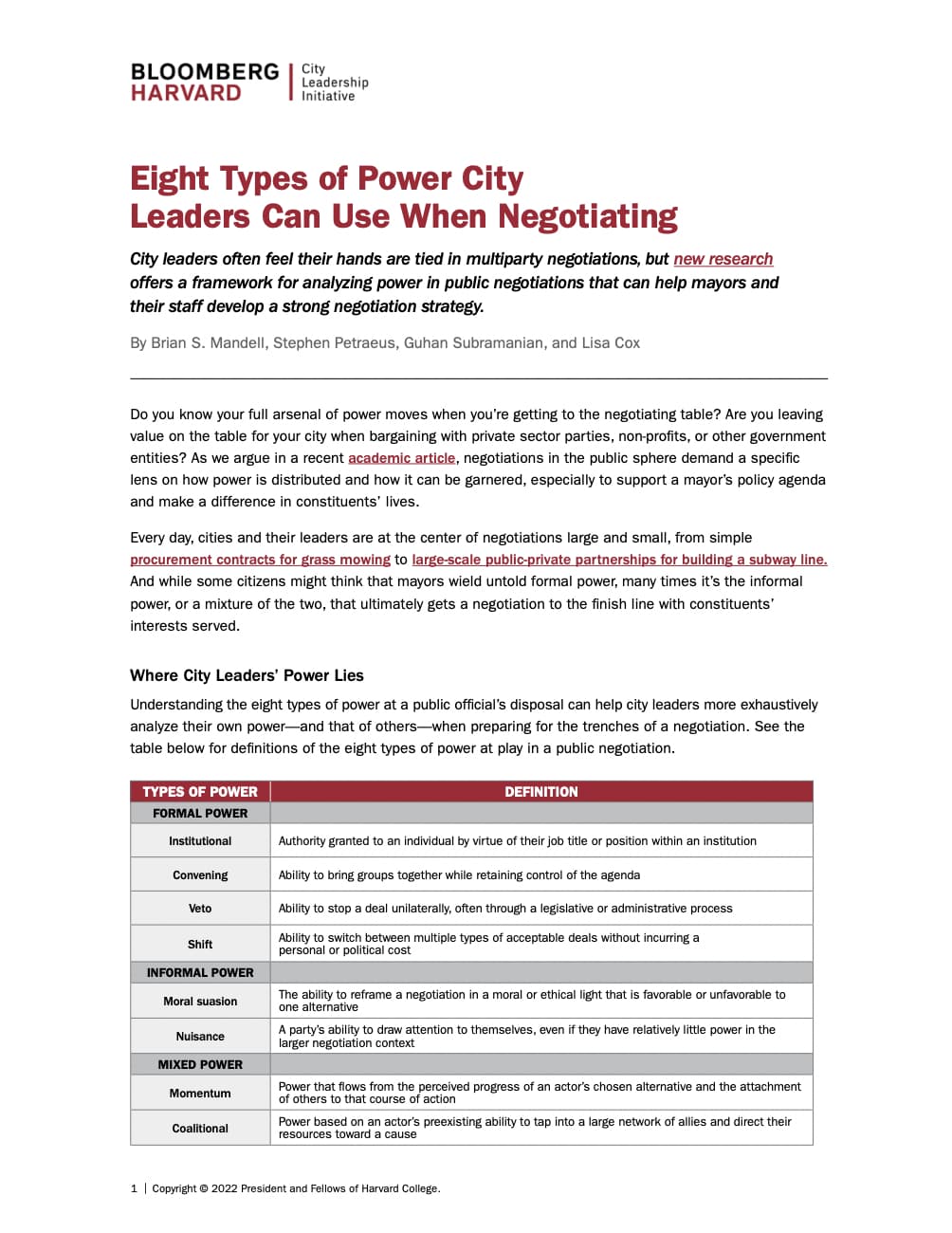