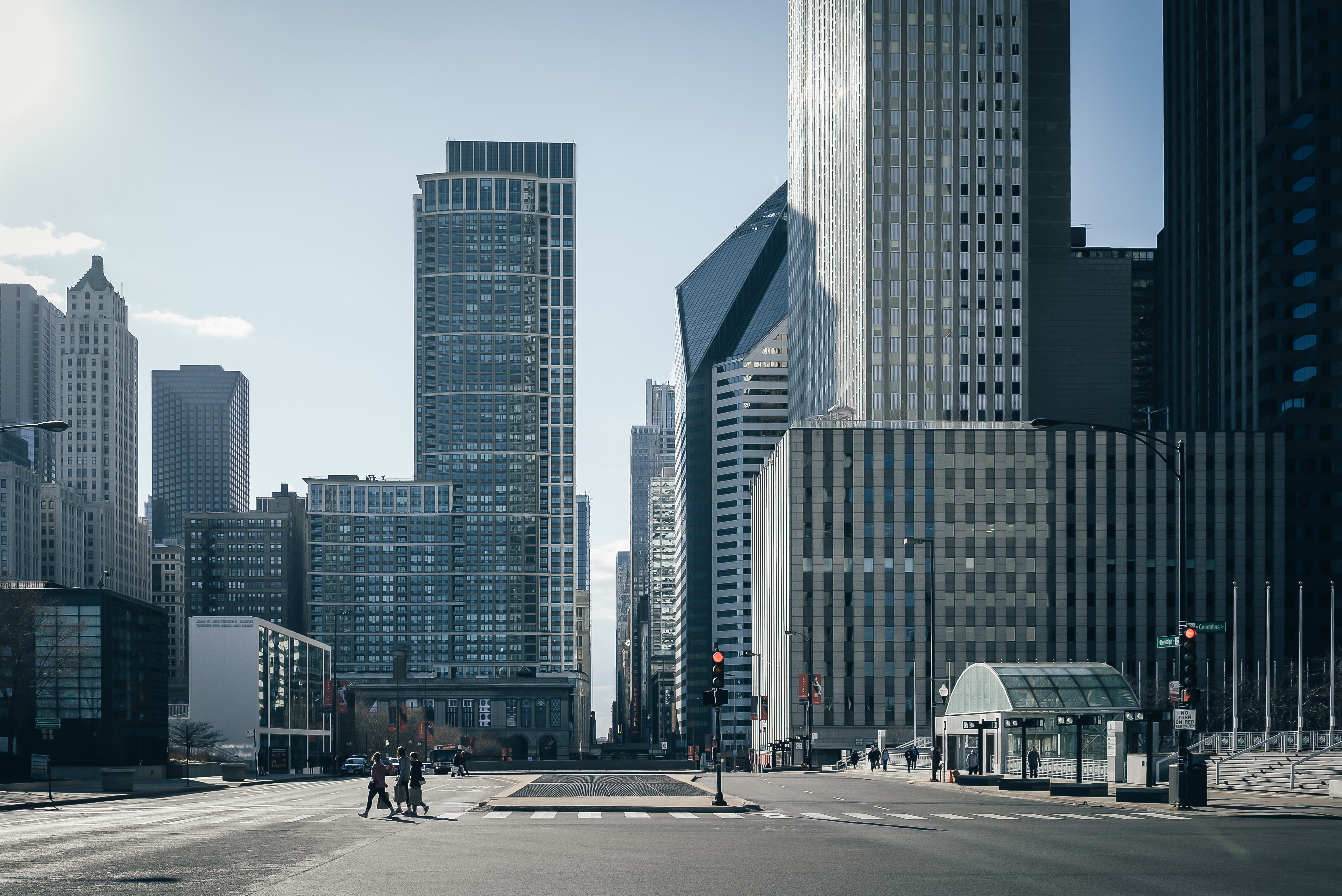 Multi-agency teams often struggle to align interests and perspectives on a given problem. A new study shows that collaborators who pick a point of entry and forge ahead—instead of getting stuck in analysis and debate—are likeliest to make progress.

In 2017, the Dutch city of Breda was plagued by organized drug gangs who were increasingly using the spare rooms and attics of residents in low-income neighborhoods for illegal marijuana production. The gangs tapped excessive amounts of electricity to power a covert plant-growing operation, creating a dangerous fire risk for city streets. Some residents were complicit in the problem, some were intimidated into assisting or keeping silent, and others were outraged by it. The police couldn’t solve this on their own; nor could the fire department, the utility company, or social workers. A multi-agency collaboration was required.

The challenge put to a group of public sector professionals—a police officer, a tax official, a utility manager, a city official, and a prosecutor—was both loosely defined and daunting: to “structurally disrupt the criminal homegrown marijuana industry.” The five collaborators, who had never met before, were now supposed to be an “integrated multidisciplinary team.” In their early meetings, each tended to frame the problem and the solution from the perspective of his own organization or professional background: the police officer saw a drug crime problem, while the utility manager was more worried about grow houses’ illegal electricity use overwhelming the system.

The problem was complex and multifaceted. In its largest frame, this was part of an offensive to disrupt organized crime in Breda. But how do you fight something as persistent and elusive as “organized crime?” The five-member team needed to define the problem as a feasible task, without losing sight of the broader context.

When a problem—or opportunity—is too large and complex for one agency to take on, cities often create multi-agency task forces. A recent study entitled "Paradoxes of Collaborative Governance" showed how many of them struggle with defining their task and coming up with a shared course of action. The challenge, on one hand, is to not get overwhelmed or paralyzed by the magnitude and complexity of a problem; and on the other, to resist focusing on symptoms and losing sight of the bigger context.

Often, difficulties lie in coming to agreement on what actually constitutes the problem and therefore, what the solution(s) can be. Accountability challenges arise when there is insufficient commitment to the collaboration, and when commitments (usually between one’s “home” organization and the collaboration) clash. Sound team design and management depend not only on trust and mutual understanding, but the prior conditions of establishing ways to talk, decide, and work together.

One way to get out of a gridlock is to follow an iterative process, where a team tentatively picks an entry point, goes back and forth between analysis and action, and “learns its way forward.” The Breda multidisciplinary team fighting the marijuana problem in the southern Netherlands applied this approach with four points in mind:

With thousands of marijuana plantations spread across the country, the team and its observers wondered how such a small group of individuals could make a dent in organized crime. Particularly, they considered how their intervention in one or a limited set of cases could lead to any significant, broader result. To move ahead, they took a leap of faith and narrowed their problem definition from tackling “organized crime” to attacking domestic marijuana-growing operations and related safety hazards. Identifying the problem allowed the team to decide on its entry point, an engagement strategy in one carefully chosen Breda neighborhood.

As an entry point, the engagement strategy of going door-to-door to raise awareness among residents of the dangers of home marijuana production, including fire hazards and extortion by criminal networks, provided a first opportunity to disrupt criminal networks. These visits and the team’s visible action as collaborative partners generated citizen support for the approach and created informal enforcement capacity.

The team focused on working in a defined time and place, but did not lose sight of the broader problem of organized crime throughout the Netherlands. It framed the problem so that it was both meaningful for society and actionable for the organizations involved. And it made use of both repressive and preventive interventions, engaging professional crime-fighting organizations as well as private parties and citizens.

The team members set and subsequently committed to joint goals and felt responsible for realizing them, even if the goals were not entirely in line with their own organization’s priorities. Moreover, the team was willing to experiment, learn, and go beyond taken-for-granted approaches. They were not afraid to take some risks along the way and have tough conversations internally and with stakeholders.

The Team at Work

The team’s entry point was learning to see the problem through the residents’ eyes: the danger of fire destroying their homes affected everyone in the neighborhood. With that in mind, the team got to work. Advanced data analysis of power consumption records identified at-risk buildings, while community engagement focused on awareness, prevention measures, and targeted police action. When it was time for the street operation to begin, a multi-agency team would knock on doors and ask to look inside all of the housing units on these blocks. Before any activity, residents would be informed about the fire hazards associated with home marijuana cultivation. The idea was to combine targeted enforcement of criminal activity with building broad community support for improved fire safety.

Before gaining approval for their plan, the team members had to win over the chain of command in their own organizations. Enlarging the conversation produced changes: the fire department, for instance, did not want to be seen as appearing in a law-enforcement role; the mayor was concerned about not stigmatizing certain Breda neighborhoods as “criminal.” Once satisfied, the mayor approved the plan and the first two days of the operation proceeded smoothly. The team requested entrance to 400 homes; two grow houses were found, including one where they had to climb in through a window where transformers for marijuana growing lights were baking at 97 degrees Celsius. Amongst themselves, the team members noted potential tweaks to the operation, while the mayor informed local media that a “new approach” was being piloted and that he was satisfied. (The police admitted that they hoped for more arrests in future operations.)

Over the next year, the team launched new operations in nearby cities and considered what it would take to implement the approach in other regions, and possibly nationwide. Reality turned out to be more complicated. Questions from mayors and police chiefs in other localities the team visited were hard to answer because the team often didn’t have information or know the local context. Initial resources and support from superiors were running out before a solid plan or strategy could be formulated; after a year, the team began to break up.

A complex societal problem, of which organized crime is just one example, will not be solved by a single government agency. It requires the collective efforts of multiple organizations, both public and private, at various levels of governance from local to global. These organizations remain autonomous with their own interests, ideas, and processes, but as collaboration begins and deepens, they will become more dependent on each other to achieve the goal.

Success is never a given, of course; when or if such efforts fail, it is often because governance challenges remain unresolved. These can include the political and technical challenges of actually defining the problem; designing the collaboration; and deciding what “success” looks like. With different organizations involved there are also various perspectives and hurdles in building trust among people who may not know each other prior to collaborating on the joint task. Finally, there are accountability challenges: to one’s new colleagues, one’s department or agency, to the project, and to society.

Assembling a successful team for a project that might be only brief or experimental requires effectively harnessing members’ problem-solving abilities to develop, design, and test innovative solutions. This means learning new skills and adopting a new mindset—one of problem-solving, experimentation, and trial and error—to be flexible enough to respond to shifting circumstances. This kind of teamwork entails establishing trust, frequently asking questions, listening carefully, and resolving conflicts early on. Since there is usually not enough time to get to know each other and to practice working together, a key skill is getting up to speed quickly on each other’s perspectives and ideas.

“Safety in the City: Building Partnerships in the Fight Against Organized Crime”
Partnerships for Livable Cities 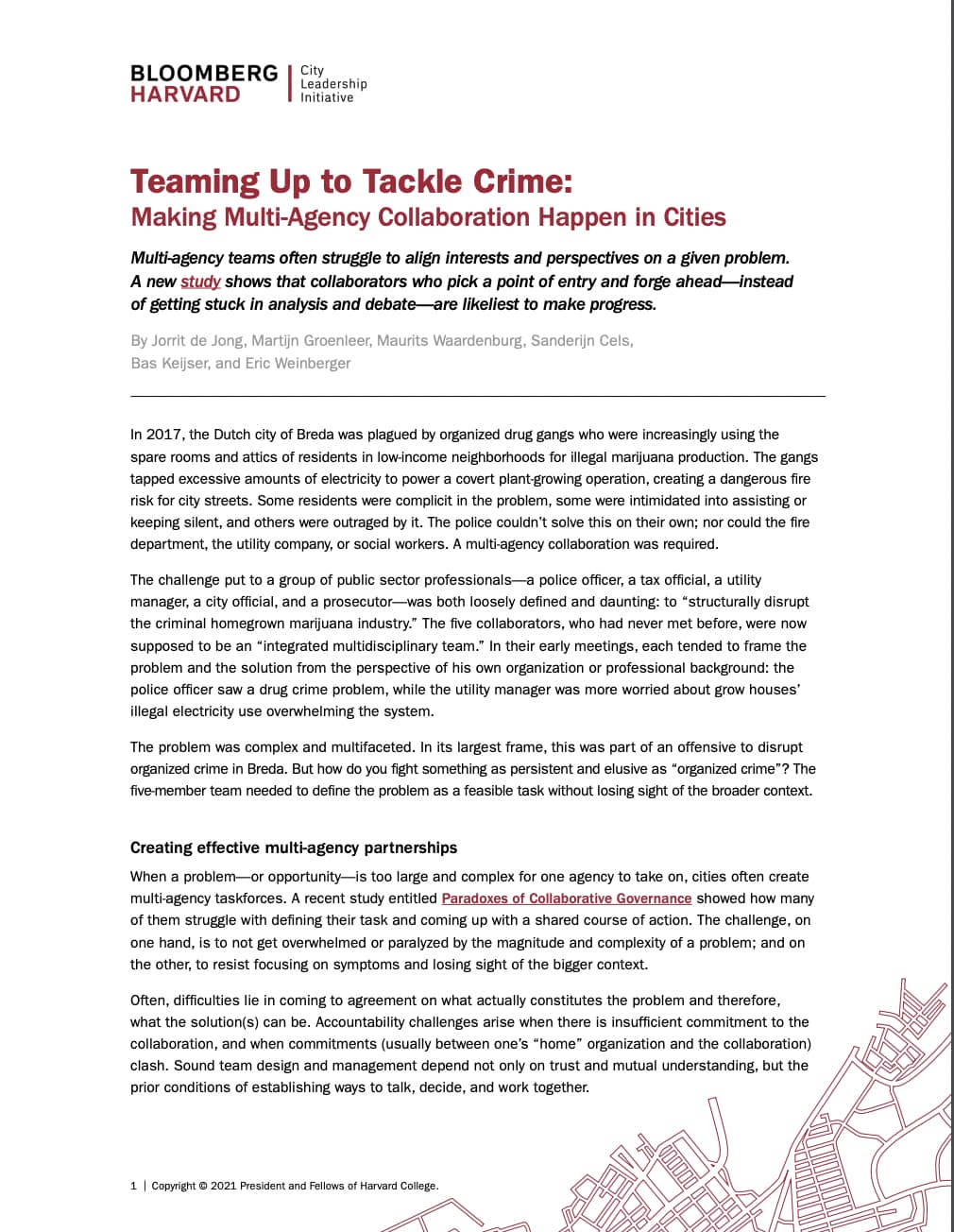